UN report calls on Myanmar’s military leaders to be investigated and prosecuted for war crimes.Photograph: Nyein Chan Naing/EPA
Horrific accounts of murders, rapes, torture and indiscriminate shelling allegedly committed by the Burmese army against the Rohingya people and other minority groups have been laid out by UN investigators in an extensive new report detailing evidence for their accusation of genocide.
The report from the fact-finding mission, presented to the UN human rights council (UNHRC) on Tuesday, said Myanmar’s military, known as the Tatmadaw, had committed “the gravest crimes under international law”.
The full 440-page report, a summary of which was released in August, includes accounts of women tied by their hair or hands to trees then raped; young children trying to flee burning houses but forced back inside; widespread use of torture with bamboo sticks, cigarettes and hot wax; and landmines placed at the escape routes from villages, killing people as they fled army crackdowns. 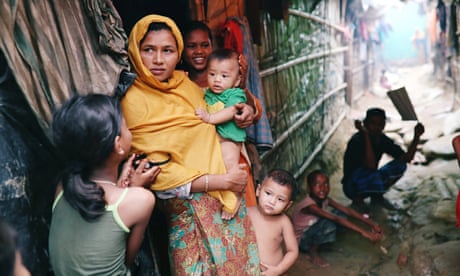 'We cannot go back': grim future facing Rohingya one year after attacks

“I have never been confronted by crimes as horrendous and on such a scale as these,” said Marzuki Darusman, the chair of the mission.

The three-person panel said the Tatmadaw had developed a “toxic command climate” in which widespread human rights abuses had become the norm. It called for the army to be brought under civilian oversight, stripped of its quota of parliamentary seats and, if necessary, totally dissolved and rebuilt.

It called for senior Burmese military leaders, including the commander-in-chief, Min Aung Hlaing, to be prosecuted for genocide, crimes against humanity and war crimes.

“Any engagement in any form with the Tatmadaw, its current leadership, and its businesses is indefensible,” the report said.
The investigators and their staff spent 15 months examining the conduct of Myanmar’s military and other armed groups in the states of Rakhine, Shan and Kachin, following years of reports of human rights abuses. They were denied access to Myanmar by the government but interviewed 875 witnesses who had fled the country.

The panel was nearly six months into its mission in August 2017 when Rohingya militants attacked a series of Burmese police outposts with knives and small bombs, triggering army “clearance operations” that forced more than 700,000 members of the Muslim minority group into neighbouring Bangladesh.

More than 1,700 Rohingya are still crossing the border into the Cox’s Bazar district of southern Bangladesh each month, the report said.

It gave a “conservative” estimate that at least 10,000 Rohingya people had been killed in the two months after the army crackdown commenced in August last year, including at least 750 people in the village of Min Gyi, known to the Rohingya as Tula Toli.

Rape and sexual violence were a “particularly egregious and recurrent feature” of the Tatmadaw’s conduct, the report said. It cited eyewitness accounts of Rohingya people who claim to have seen naked women and girls running through forests “in visible distress” and villages scattered with dead bodies with “large amounts of blood … visible between their legs”.

They noted a buildup of armed forces in Rakhine state in the months leading up to the clearance operations and a sharpening of anti-Rohingya rhetoric, including by civilian leaders. “The human rights catastrophe of 2017 was planned, foreseeable and inevitable,” the report said.

It sharply criticised the UN presence in Myanmar, finding that top officials were loth to pursue a human rights agenda, preferring a “business as usual” approach that prioritised development goals and maintaining access for humanitarian groups.

Some of those who tried to push human rights issues told investigators they were “ignored, criticised, sidelined or blocked in these efforts”, the report said.

Facebook was also singled out by investigators for the ease with which its open platform allowed hate speech and misinformation to spread.

Members of the panel attempted to report a post in which a human rights activist was accused of cooperating with the fact-finding mission and labelled a “national traitor”. One comment under the post read: “If this animal is still around, find him and kill him.”

The panel was told the post did not contravene Facebook guidelines and it was only removed several weeks later with the support of a contact at the social media company.

A Rohingya woman walks with a child in the Balukhali refugee camp in Bangladesh. Photograph: Munir Uz Zaman/AFP/Getty Images
Bangladesh and Myanmar have both agreed in principle that the Rohingya refugees sheltering in Cox’s Bazar should return, but the report said repatriation in the current circumstances was out of the question.

“The security forces who perpetrated gross human rights violations, with impunity, would be responsible for ensuring the security of returnees,” it said. “Repatriation in such condition is inconceivable.”

Kyaw Moe Tun, Myanmar’s representative to the UN in Geneva, told the council the report lacked “balance, impartiality and fairness”, criticising its reliance on refugee testimony and the reports of NGOs – though the Burmese government did not grant the mission access to the country.

“Not only is this report detrimental to social cohesion in Rakhine state, it also undermines the government’s efforts to bring peace, national reconciliation and development to the entire nation,” he said.

Bangladeshi officials said on Tuesday they were moving ahead with a controversial plan to relocate thousands of Rohingya refugees to a remote island in the Bay of Bengal.

The six generals named in the UN's Myanmar report

Human rights groups have warned that the muddy strip of land, which emerged from the sea in 2006, is too exposed to flooding and cyclones to be safely inhabited.

The Bangladesh government says it has spent £212m on embankments and shelters and that the island will one day house 100,000 Rohingya people.
Posted by Habib Siddiqui at 3:31 PM