Amnesty International withdraws its highest honour due to the Myanmar leader's "shameful betrayal of values she once stood for". 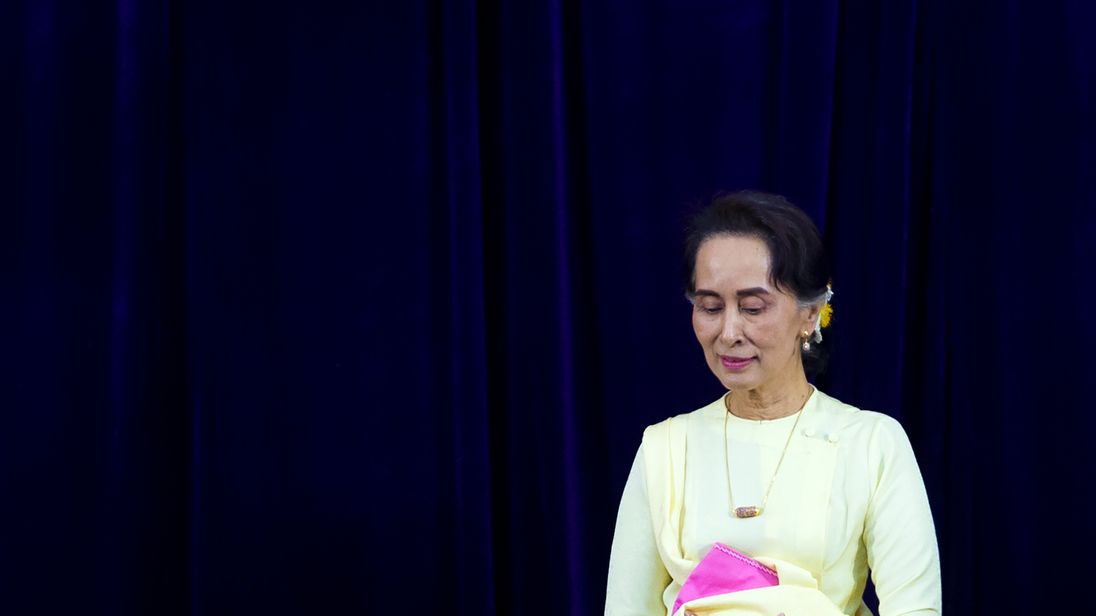 Image:Aung San Suu Kyi's official role is that of Myanmar's state counsel
Amnesty International has withdrawn its top human rights award from Aung San Suu Kyi, saying she "no longer represents a symbol of hope".
Myanmar's de-facto leader was given the Ambassador Of Conscience award in 2009 while under house arrest after years of opposing the military regime.
At the time, Amnesty hailed her as a "symbol of hope, courage and the undying defence of human rights".
But since becoming Myanmar's leader in 2016, the Nobel Peace Prize laureate has been almost silent on the treatment of Myanmar's Muslim minority.
More than 700,000 Rohingya Muslims were forced to flee their homes in mainly Buddhist Myanmar during a military crackdown that began in August last year.
The military's campaign included murder, rape, torture and the destruction of people's homes and has been described by the UN as a "textbook example of ethnic cleansing". 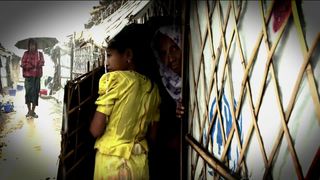 2:50 Video:UN: Myanmar generals must face trial
Amnesty said that Ms Suu Kyi and her office had "repeatedly shielded the security forces from accountability by dismissing, downplaying or denying allegations of human rights violations and by obstructing international investigations into abuses".
Her actions have been a "shameful betrayal of the values she once stood for", the organisation said. 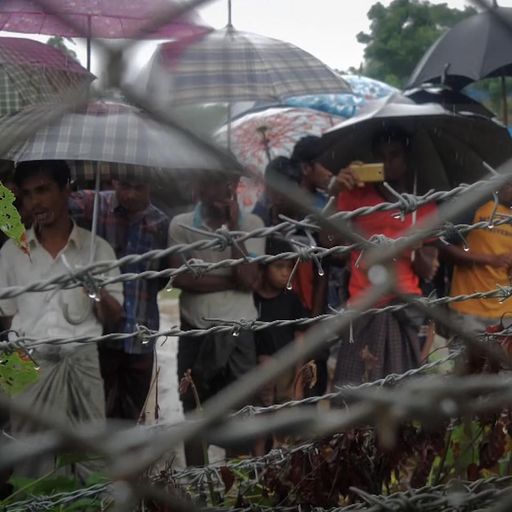 Why Rohingya Muslims have been forced to flee their homes
Amnesty International's UK director Kate Allen said it had been "shocked" by how Oxford-educated Ms Suu Kyi had responded to the plight of the Rohingya.
She told Sky News that Ms Suu Kyi had been "a beacon of hope in that country but I'm afraid what happened over the last 15 months has discredited her completely".
"We know that the generals are leading this but she has authority, she has a voice, she had huge moral authority but she has squandered that," Ms Allen said.
"The prize was awarded for her humanity, her stand against human rights abuses... what we've seen since August last year has just been a shocking denial of what is happening in Rakhine state."

Video Suu Kyi : Rohingya Crisis Could have been handle Better
In a letter advising Ms Suu Kyi of the move, Kumi Naidoo, Amnesty's secretary general, said: "As an Amnesty International ambassador of conscience, our expectation was that you would continue to use your moral authority to speak out against injustice wherever you saw it, not least within Myanmar itself.
"Today, we are profoundly dismayed that you no longer represent a symbol of hope, courage, and the undying defence of human rights.

"Amnesty International cannot justify your continued status as a recipient of the Ambassador Of Conscience award and so with great sadness we are hereby withdrawing it from you."
Past winners of the award include Nelson Mandela and Malala Yousafzai.
Amnesty also criticised Ms Suu Kyi's failure to repeal laws used to detain human rights campaigners, adding that she has even defended laws used against two Reuters journalists jailed while reporting a military massacre. 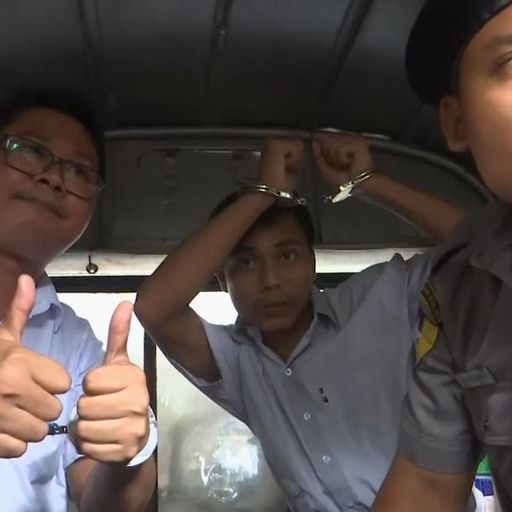 Evidence of Rohingya massacre in Myanmar

Read the story Wa Lone and Kyaw Soe Oo worked on before their arrest
They said: "Despite the power wielded by the Myanmar military, there are areas where the civilian-led government has considerable authority to enact reforms to better protect human rights, especially those relating to freedom of expression, association and peaceful assembly.
"But in the two-and-a-half years since Aung San Suu Kyi's administration assumed power, human rights defenders, peaceful activists and journalists have been arrested and imprisoned, while others face threats, harassment and intimidation for their work."
Posted by Habib Siddiqui at 3:58 PM