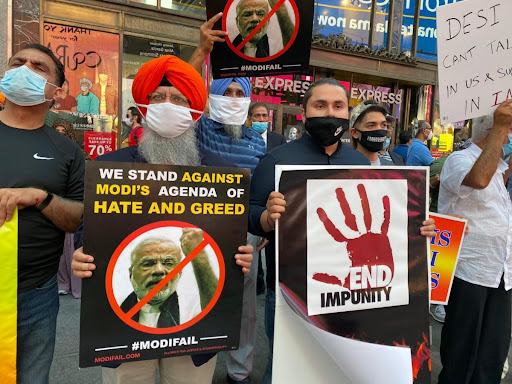 Broad coalition exposes Hindu nationalist front organizations in the US, and their agenda of normalizing human rights abuses in India.
The “Coalition to Stop Genocide in India”, a broad coalition of South Asian Americans and US based civil rights organizations and activists today organized a massive rally at Times Square, in order to protest the celebration of the destruction of the Babri Mosque in India. The celebrations were organized by an entity that calls itself the American Indian Public Affairs Committee (AIPAC), a front for several Hindu nationalist (a.k.a. Hindutva supremacist) organizations in the US. Protesters in large numbers held placards and chanted slogans to highlight massive human rights abuses in India, by India's ruling Bharatiya Janata Party (BJP) led by Prime Minister Narendra Modi. For some who had gathered to celebrate the construction of the Ram Temple in India on the ruins of the Babri Mosque, the protests were a reminder that normalizing hate and bigotry w…
Post a Comment
Read more

Ram and his abode

August 06, 2020
Neha DabhadeThere is a palpable excitement and buzz about the impending construction of “the” Ram temple in Ayodhya which commences with a bhoomi pujan on 5th August, 2020. There are claims of its grandiose- the proposed temple being twice the size it was originally envisaged. The temple, to be constructed in Nagara style of architecture, will have five domes instead of two as envisaged earlier to accommodate more number of devotees, said Mr. Sompura, the architect of the temple (reference). Interestingly, this bhoomi pujan will be an equally grand affair where no less than the Prime Minister will be in attendance along with other public figures. Ironically, this event comes on the heels of the news that an assistant priest and four policemen posted at the site tested positive for coronavirus. The authorities said the developments would have no effect on the programme, scheduled for August 5, and expected to be attended by around 250 people (Mishra & Tiwary, 2020). With a global p…
Post a Comment
Read more

August 06, 2020
In November last year, the International Criminal Court (ICC) moved to begin the full investigation into Myanmar’s violent international crimes and other events connected to the exodus of Rohingya from western Myanmar in decades.
In August 2017, Myanmar Tatmadaw, or the military, launched the "Security Clearance Operations," which resulted in the exodus of 750,000 Rohingya from across the borders into the adjacent Bangladesh city of Teknaf.
As the ICC proceeds with its full investigation, it needs to look into the instrumental role of Sitagu Sayadaw, Myanmar’s most influential Saffron-robed hate preacher, in the genocidal and other crimes against predominantly Muslim Rohingya.
The ICC was set up in the Hague in 2002 to try individuals sufficiently linked to grave crimes under international law owing to their criminal responsibility, for instance, political and military leaders of the perpetrating state, militia heads and key civilians.
The proactive involvement of leading Buddhi…
Post a Comment
Read more
More posts