He Escaped Burma, But Not Australia’s Abusive Refugee Policy 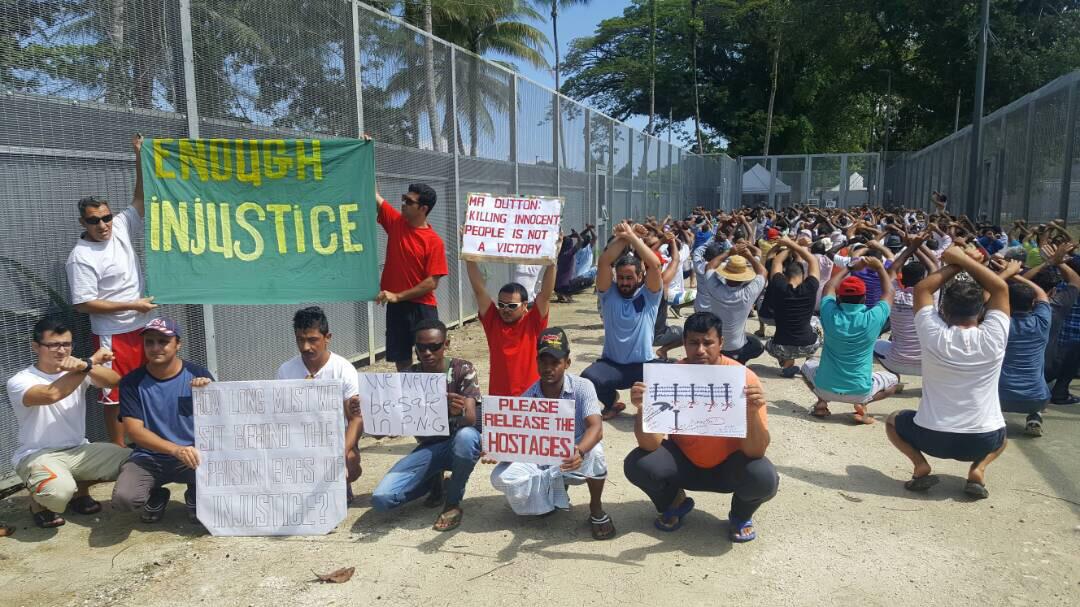 Media Desk Officer
When the Burmese military appeared in “Faruk’s” home village in Rakhine State in 2013, his mother pleaded for him to leave. They are Rohingya Muslims, who have long been persecuted in Burma, and his mom feared for her 18-year-old son’s safety. She’d heard of Rohingya men who had been summarily executed when the military arranged “meetings” in their villages. Faruk fled.
He made the journey from Burma by boat to Thailand, to Malaysia, to Indonesia, and then to Australia’s Christmas Island. But when his boat reached Australian waters, Australian immigration officials questioned him and transferred him to a detention center on Manus Island in Papua New Guinea (PNG).
In the years since then, he’s been trapped on Manus Island. “In four years, I couldn’t find any way to live here,” said Faruk, now 23. “We’ve suffered a lot.”
Since July 2013, Australia has sent all asylum seekers who try to reach Australia by boat to cramped and dirty offshore processing centers on Manus Island and to the Pacific island nation of Nauru. Faruk arrived at Christmas Island a few days after the policy change. Now, he is one of 770 refugees, asylum seekers, and rejected asylum seekers, all men, stuck in PNG. Human Rights Watch recently interviewed 40 of them from Afghanistan, Bangladesh, Burma, Iran, Pakistan, Sri Lanka, and Sudan. All described their difficult lives on Manus, including being assaulted and robbed by local youths and not receiving proper medical care.

Refugees and asylum seekers on Papua New Guinea’s (PNG) Manus Island have suffered repeated violent attacks and robberies by locals, with inadequate hospital care on the island and no action by police.
Returning to Burma is not an option for Faruk. The Burmese government does not recognize Rohingya, who have lived in the country for generations, as citizens, and refuses to take them back. Since August, more than half a million Rohingya have fled the countryafter the military opened a campaign of killing, rape, and arson against them that amount to crimes against humanity.
He learned that his family’s village was burned down in early September, and his family fled by boat to neighboring Bangladesh. His older sister, who was pregnant, delivered her baby an hour before getting on the boat. He replayed the WhatsApp voice message his mother sent him as they were leaving: “We don’t know when we’re going to die, please pray for us. Praise Allah, you are safe.” He said he could hear gunshots in the background.
“I felt hopeless … I am so glad that they are safe,” Faruk said, adding that they’ve asked him to name the baby.
He said it’s difficult for him to talk about his family, about everything that’s happening in Burma. “Since Rakhine happened, I used the internet for two, three days, and then I just switched it off. I had enough of seeing this,” he said.
Faruk spent his first two years on Manus Island at the main regional processing center, on an isolated part of the small island, before authorities pressured him to relocate to a transit center designated for refugees. He resisted the move because the residents of the transit center are often targets of assault or robbery by young Papuan men. But immigration officials just made life at the processing center more difficult: They cut off his phone and internet access at the main center, and stopped giving him “points,” which had enabled him to buy goods at the center’s canteen. Finally, he gave in and moved.
About two years ago, the Human Rights Watch Australia director, Elaine Pearson, first met Faruk at the transit center. At the time, he couldn’t eat or sleep, he said. He had terrible headaches and started taking sleeping tablets.
Pearson saw Faruk again this September. He was still living at the transit center. Refugees and asylum seekers protest against Australia’s offshore processing policy at a detention center on Manus Island, Papua New Guinea.© 2017 Private
It is difficult for the refugees and asylum seekers on Manus to feel safe outside the main center and the transit center. Groups of local young men, sometimes armed with sticks, rocks, knives, or screwdrivers, have robbed them in town, including in broad daylight. Faruk said he has been attacked physically and verbally by the men, who have often thrown stones at him.
“It happened so many times, it’s not one time. So many, many times. Not only to me, to many, many other visitors,” Faruk said. In recent months, the attacks have escalated. Faruk says he rarely ventures into town anymore, for fear of being assaulted, and often doesn’t leave the confines of the transit center.
He told Pearson he suffers from anxiety and has collapsed a few times. His ankle was swollen from a recent collapse.
“I’ve become very weak and sick,” he said. “When I take sleeping tablets, I sleep long but I don’t know what to do, what to think, what to cook, what to eat, what to pray. I don’t feel good.”
In September, Faruk participated in a training course in PNG’s capital, Port Moresby, which he hoped would provide a brief respite from life on Manus and some useful skills. But he witnessed attacks even in Port Moresby. During the day, a raskol (criminal) gang came into the motel where he was staying and at gunpoint forced a Papuan man to hand over the keys to his car.
So Faruk waits. He hopes for asylum in the United States, which has agreed to take some Manus and Nauru refugees, and has completed the interview process. But Australia remains unwilling to admit any of the refugees on its offshore processing centers and yet insists that it will shut the main center on Manus by October 31, putting those evicted at greater risk. Rather than abandoning refugees like Faruk, it should admit and integrate these men, whom it has failed to protect.
Faruk said he doesn’t dream of buying a car or owning a house. He dreams of working part-time, and studying part-time.