Showing posts from December, 2017
Show all

December 31, 2017
by Habib Siddiqui   2017 has proven to be a very disappointing year for most people around the globe. Starting with Donald Trump as the president of the most powerful country in the globe so many things simply went from bad to worse and beyond. We, as global citizens, have miserably failed to stop the Rohingya genocide in Myanmar. Nearly 700,000 Rohingyas have been forced to leave their ancestral homes in the Arakan (Rakhine) state of Myanmar because of the state-sponsored genocidal pogroms of Myanmar government and its murderous Buddhists there. More than 14,000 Rohingyas were also murdered , let alone tens of thousands of females that were raped by savage Buddhists. The sufferings of the Rohingyas who have managed to flee, according to international human rights groups , “is nothing in comparison to those who have been left behind, who are unable to move since they’re too old or don’t have the finances to pay people or traffickers to traffic them out of the area ”. We know g
Post a Comment
Read more

The year of Love Jihad in India by Rahul Bhatia 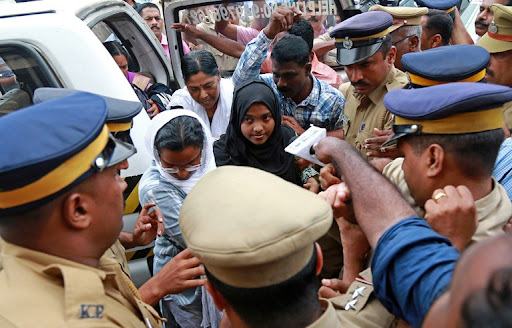 “I need the freedom to meet the person I love,” the former Akhila Ashokan , who married a Muslim man against the wishes of her Hindu parents, said. “I am asking for fundamental rights.” Photograph by Sivaram V. / Reuters In 2011, when Akhila Ashokan was eighteen, she left her home in T. V. Puram, a village in Kerala, for college in Salem, a busy town seven hours to the east. Her father, K. M. Ashokan, was an ex-military man; her mother, Ponnamma, a practicing Hindu. In Salem, Akhila studied homeopathy, boarding with five women, including two Muslim sisters, Jaseena and Faseena, with whom she studied, cooked, and talked. Akhila watched them pray. Soon after—it is unclear when, exactly—Akhila started to read books and watch videos that helped her understand Islam. Feeling the stirrings of a new faith, she began to pray. In 2015, she decided to call herself Aasiya. To her father, Akhila seemed a changed person in November, 2015, when she returned home for a funeral. She
Post a Comment
Read more

by Habib Siddiqui Part 2: Muslim Period In 636 CE, at the battle of Yarmouk, the Byzantines were decisively defeated by the Muslim Army, led by Amr ibn al-‘As (R). Within months in 637 CE, the Muslim army under the leadership of Abu Ubayda ibn Jarrah (R) lay a bloodless siege on Jerusalem, which lasted for four months. Patriarch Sophoronius offered to surrender the city if Khalifa Umar ibn al-Khattab (R) himself would come in person to ratify the terms of the surrender. The encounter between these two men was very dramatic. In the words of a Christian historian, Anthony Nutting, "Umar taught the caparisoned throng of Christian commanders and bishops a lesson in humility by accepting their surrender in a patched and ragged robe and seated on a donkey." [The Arabs, New American Library, N.Y. (1964)] The terms of the surrender were: " Bismillahir Rahmaneer Raheem (In the name of Allah, Most Gracious, Most Merciful). This is a covenant which Umar, the servant of Alla
Post a Comment
Read more

December 29, 2017
Here below is another excellent article by Stanley Cohen . ============= History is inexplicable.  It has a way of seizing the chosen few to deliver a commanding message that transcends the tapered, often rote, confines of time, place and journey. Like the mystery of magic, defining moments seem to find powerful launch through the flash of a sudden second and echo through the voice of those destined to become iconic well beyond the rhyme of powerful lyric alone. To them, theirs is a journey of the ages. For those fortunate enough to witness such passage it is a transcendent reminder that greatness is measured not through acquired wealth or power but by the prompt of the principle, courage and sacrifice of the few. Who can forget Faris Odeh, 15 years old when he stared down a tank with little more than a stone in his hand, murdered by Israel in Gaza?  Or 23 year old Rachel Corrie, on that mist covered morning, armed with a bullhorn as she faced off against a bulldozer to save a hom
Post a Comment
Read more

December 29, 2017
A Muslim indigenous community in the southern Philippines has suffered widespread human right abuses that could intensify with President Rodrigo Duterte’s extension of martial law there, U.N.-appointed experts said. Duterte has called the huge island of Mindanao a “flashpoint for trouble” and atrocities by Islamist and communist rebels. He placed it under martial law in May after Islamist militants took over the city of Marawi. The five-month siege was the majority-Roman Catholic Philippines’ biggest security crisis in decades, killing more than 1,100 people, mostly militants. Lawmakers this month overwhelmingly backed his plan to extend martial law there through 2018, which would be the country’s longest period of emergency rule since the 1970s era of strongman Ferdinand Marcos. The militarization had displaced thousands of the indigenous Lumad people and some had been killed, said Victoria Tauli-Corpuz and Cecilia Jimenez-Damary, the U.N. Human Rights Council’s special rapporteu
Post a Comment
Read more 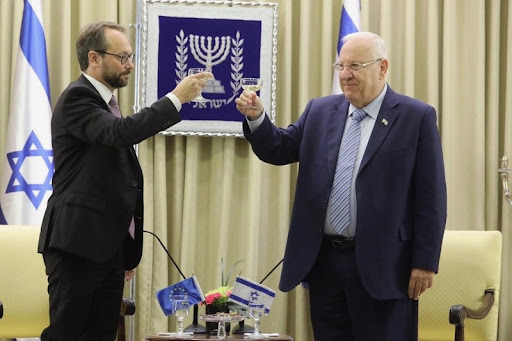 EU Ambassador Emanuele Giaufret, left, raises a glass with Israeli President Reuven Rivlin in October. ( via Facebook ) A day after meeting Zionist rabbis – who form the religious backbone of Israel’s West Bank colonization – Prime Minister Benjamin Netanyahu awarded another big dollop of cash for settlements on occupied Palestinian land. According to the newspaper Haaretz , Netanyahu had sought the rabbis’ support in the face of mounting corruption probes. Netanyahu’s office denies any quid pro quo. Among those meeting the prime minister were Haim Drukman, one of the founders of the Gush Emumim settler movement. In 2012, Drukman, along with other senior rabbis and officials, held a ceremony to bid farewell to a prison-bound settler convicted – a rare occurrence – of abusing a Palestinian by beating him up, firing a gun near his head, stripping him and leaving him naked by the side of a road. Drukman led that ceremony along with Dov Lior, a rabbi from the notoriously extreme
Post a Comment
Read more
More posts