Showing posts from March, 2018
Show all

When is enough truly enough?

March 31, 2018
Fox News show host Laura Ingraham announced on her show late Friday that she is taking next week off. I think it was a wise decision given the fact that almost a dozen advertisers have dropped her show after the chauvinist talk show host mocked David Hogg, 17, a teenage survivor of the Florida school massacre, on Twitter on Wednesday, accusing him of whining about being rejected by four colleges to which he had applied. Hogg called for a boycott of her advertisers in the show, "The Ingraham Angle. Hogg is one of the survivors of the Feb. 14 mass shooting that killed 17 students in Marjory Stoneman Douglas High School in Parkland suburb of Fort Lauderdale, Florida. Soon after the mass shooting, he and his surviving friends have become the new faces of activists calling for stricter gun control. Fox News is part of Rupert Murdoch's Twenty-First Century Fox Inc., and has been a strong supporter of the NRA and of course, President Trump. Naturally, it has been on the othe
Post a Comment
Read more

March 31, 2018
Benjamin Netanyahu has praised Israeli troops , a day after they were accused of killing at least 16 Palestinian protesters at the border with Gaza . In a message posted on Twitter in which he thanked soldiers for allowing the nation to celebrate the Passover holiday, the Israeli Prime Minister, wrote: “Well done to our soldiers. Israel acts vigorously and with determination to protect its sovereignty and the security of its citizens.” He posted the message a day after thousands of Palestinians rallied on the Gaza side of the border fence, throwing stones and rolling burning tyres at Israeli soldiers. Israeli troops responded with live fire, killing 16 protesters, according to Palestinian officials, in what marked some of the deadliest violence in recent years. On Saturday, as many as 70 Palestinians were injured as clashes continued, though more sporadically. Israel, as it routinely does, said its soldiers had only fired in self defence and said there were efforts by Palestini
Post a Comment
Read more

March 30, 2018
By C R Abrar Slowly but surely the world is coming to terms with the gruesome reality of Burma's genocide of the Rohingyas. As early as 2015 London Queen Mary College's State Crimes Initiative alerted the international community of the ongoing genocide in Arakan. Hardly anyone paid heed to that ominous warning. Eventually, as the situation in Arakan took a turn for the worse, taking a heavy toll on Rohingya lives, livelihood and liberty, the progressive elements among the international community acknowledged the unpalatable reality. The People's Tribunal on State Crimes of Myanmar, in two subsequent sittings in March and September 2017 in London and Kuala Lumpur respectively, unequivocally termed the atrocities committed by the Burmese government as "genocide". The UN special rapporteur on human rights situation of the country has clearly stated that such actions bear the "hallmarks of genocide". Without mincing his words, the French President
Post a Comment
Read more

Oh Rohingya, who are you? And where is your homeland? - a poem by Dr Maung Zarni

The downward spiral of vulnerability in Rohingya camps

March 30, 2018
Yasmin Khan is a doctoral candidate in human geography and women and gender studies at the University of Toronto. I reproduce  her article below . Last May, on my first   day   visiting the Rohingya refugee camps, I witnessed my Rohingya guide attempt to retrieve a child who had been kidnapped by a man who had hired her to clean his house. "She is 12-years-old. He is 50. We know where she is, her family wants her back," he spoke into one cell phone. He translated the answer he received to another phone. A few minutes later, he hung up both phones, sighing. "The man took her as his second wife. We know where she is but we can’t go get her," he said. "He is Bangladeshi and we are Rohingya." He had been talking to his contact at the International Organization for Migration (IOM), the agency in charge of the approximately 200,000 "unofficial" Rohingya refugees and new arrivals living in makeshift camps last   May,   2017. On the other phone, he
Post a Comment
Read more

Laura Ingraham - the chauvinist - should be fired

March 30, 2018
A survivor of last month’s Florida school mass shooting has called on a US television chat-show host who mocked him to step down. David Hogg said Fox News presenter Laura Ingraham should quit as he rejected her apology for accusing him of “whining” over being rejected by four colleges. Ms Ingraham had apologised to Mr Hogg for her controversial tweet after seven companies took Mr Hogg up on his suggestion that they pull their advertising from her show. But the student, who has led a high-profile campaign for gun control since the massacre that left 17 people dead, rejected her apology and said it was “great” that corporate America was standing behind him and fellow pupils who were standing up for reform. Nikolas Cruz has been charged with 17 counts of premeditated murder for the 14 teenagers and three adults who died at the Marjorie Stoneman Douglas High School in Parkland on Valentine’s Day. At a March For Our Lives rally in Washington DC, Mr Hogg told a crowd of thousands
Post a Comment
Read more

March 30, 2018
Israeli Prime Minister Benjamin Netanyahu yesterday asked the chairman of the government coalition to push the “ Muezzen Bill ”, which outlaws the Muslim call for prayer – athan , to get Knesset approval, Arab48 reported. The bill was shelved for about a year after it passed an initial reading in the Knesset. Analysts expected the renewal of the proposal to lead to a new coalition crisis as the bill is opposed by the ultra-orthodox Jewish parties. The bill initially banned Muslims from using loudspeakers at mosques to call for prayer, it was later modified to include the use of loudspeakers from 11pm to 7am in an effort to appease ultra-orthodox Jews who were worried it would hinder their religious rites. Violators of the ban would be fined 10,000 shekels ($3,000).
Post a Comment
Read more

Palestinians get bulldozed for doing what the U.S. State Dep’t is doing

March 30, 2018
By  Scott Roth and Phil Weiss The news from Israel Tuesday was that the finance minister had waived all building permit and rezoning requirements so as to allow the U.S. State Department to ramp up construction on a consular building in South Jerusalem that is to become the new U.S. Embassy, perhaps as early as May. The  Times of Israel reported that  Minister Moshe Kahlon said he would sign the waiver because moving the embassy is such a political priority: “As we promised, we won’t let unnecessary bureaucracy delay the move of the American embassy to Jerusalem, Israel’s eternal capital,” he said in a statement. “…This is a strategic diplomatic move for the State of Israel.” Israel’s i24 channel said this would save months or years of delays, and Yaacov Lozowick, the Israeli archivist, celebrated : “The elected politicians have succeeded in twisting the arms of the bureaucrats. This is no small feat.” The green light for the Americans only highlights the red light that Pa
Post a Comment
Read more

For Bolton, the Slaughter of 1 Million Iraqis Is a Job Qualification

March 30, 2018
By Dahr Jamil The illegal 2003 invasion and occupation of Iraq has, thus far, left approximately 1 million Iraqis dead . That is roughly 5 percent of the total population of that country. If a foreign military superpower invaded and occupied the US and annihilated 5 percent of the total population here, that would be 16,300,000 dead US citizens. President Donald Trump's incoming national security adviser, John Bolton, still thinks the mass destruction of Iraq was a good idea. "We are confident that Saddam Hussein has hidden weapons of mass destruction [WMDs] and production facilities in Iraq," Bolton  said  in 2002 while he served as President George W. Bush's under secretary of state for arms control and international security. He did everything he could to prompt the launch of the US invasion -- under the pretext of WMDs that never existed. Then, 12 years later, with 5 percent of the total population of Iraq dead, thousands of US troops dead and trillions of do
Post a Comment
Read more 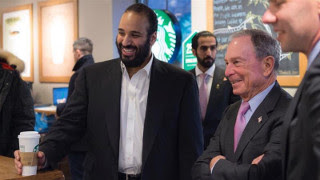 By Jason Ditz Amid recent reports of improving Saudi-Israel ties, at least behind the scenes, the Saudi Crown Prince Mohammed bin Salman, who is visiting the United States, has met with the leaders of a number of US Jewish organizations. Saudi Crown Prince Mohammed bin Salman and former NYC Mayor Michael Bloomberg The prince visited with officials from AIPAC, Stand for Israel, the American Jewish Committee, ADL, the Jewish Federation of North America, and others . The visits were revealed in a leaked copy of his itinerary, and were not meant to be publicized. It’s not just that these groups are Jewish, as such, or even that they’re broadly pro-Israel. Much of the controversy is seen as many of the groups are both involved in the Israeli settlement venture, illegal under international law and widely criticized in the Middle East, and are anti-BDS groups. Analysts familiar with the situation say that these meetings are being done broadly for the benefit of how the Saudis believe it l
Post a Comment
Read more

March 30, 2018
More than 1,400 others wounded by Israeli forces during march calling for return of Palestinian refugees to their lands. --- The Palestinian Authority has declared Saturday a day of national mourning after 15 Palestinians were killed by Israeli forces  as thousands marched near Gaza's border with  Israel  in a major demonstration marking the 42nd anniversary of Land Day.  "Schools, universities as well as all government institutions across the country will be off on Saturday, as per President Mahmoud Abbas' decision to declare a day of national mourning for the souls of the martyrs," a statement issued on Friday said.  More than 1,400 others were wounded after Israeli forces fired live ammunition at protesters and used tear gas to push them back from a heavily fortified fence, according to the Palestinian Ministry of Health.  Friday's demonstration commemorated  Land Day , which took place on March 30, 1976, when six unarmed Palestinian citizens of Israe
Post a Comment
Read more
More posts