Showing posts from April, 2018
Show all

Do the Rohingyas qualify as victims of genocide?

April 28, 2018
The Genocide Convention was adopted by the General Assembly of the United Nations in 1948 and entered into force in 1951. It declares that genocide is a crime under international law. Article II of the Genocide Convention defines genocide as: any of the following acts committed with intent to destroy, in whole or in part , a national, ethnical, racial or religious group, as such: - Killing members of the group; - Causing serious bodily or mental harm to members of the group; - Deliberately inflicting on the group conditions of life calculated to bring about its physical destruction in whole or in part; - Imposing measures intended to prevent births within the group; - Forcibly transferring children of the group to another group. Genocide is a serious crime that cannot be used lightly. It is the ultimate denial of the right to existence of an entire group of human beings. As such, it is the quintessential human rights crime because it denies its victims’ very huma
Post a Comment
Read more

When Caste Discrimination Comes To The United States

April 27, 2018
By Sonali Paul At over three thousand years old, caste hierarchy is one of the oldest forms of social stratification in the world: the community you're born into in places like India, Pakistan and Nepal has designated where you can work, who you can marry, and what your reputation is in life. Even today in South Asia, caste conflict and discrimination remain a potent force in everyday life. In the United States, though, caste tends to be a relatively muted topic. But a new survey , "Caste in the United States," finds that caste discrimination is playing out in the United States as well — a finding that raises questions around how South Asian Americans understand themselves and their history. The survey, which is the first of its kind, was commissioned by Equality Labs, a South Asian American human rights startup, and includes the experiences of about 1200 people who volunteered their answers. The report on the survey's results said that two-thirds of members of th
Post a Comment
Read more

Why Are Palestinians Protesting in Gaza?

April 27, 2018
By Mike Merryman-Lotze Once again, the Israeli military has turned its guns on Gaza — this time on unarmed protestors, in a series of shootings over the last few weeks. Gaza’s already under-resourced hospitals are straining to care for the 1,600 protesters who have been injured, on top of 40 killed. According to a group of United Nations experts , “there is no available evidence to suggest that the lives of heavily armed security forces were threatened” by the unarmed demonstrators they fired on. The violence is getting some coverage in the news. But the conditions in Gaza that have pushed so many to protest remain largely invisible. So do their actual demands. The Great Return March was organized by grassroots groups in Gaza as a peaceful action with three key demands: respect for refugees’ right to return to their homes, an end to the Israeli occupation of Palestinian lands, and an end to the Israeli blockade of Gaza. Seventy years ago, Palestinians were expelled from their h
Post a Comment
Read more

Is the U.S. Government Evil? You Decide

April 27, 2018
by John W. Whitehead “The greatest evil is not now done … in concentration camps and labour camps. In those we see its final result. But it is conceived and ordered (moved, seconded, carried, and minuted) in clean, carpeted, warmed and well-lighted offices, by quiet men with white collars and cut fingernails and smooth-shaven cheeks who do not need to raise their voices. Hence, naturally enough, my symbol for Hell is something like the bureaucracy of a police state or the office of a thoroughly nasty business concern.” ― C.S. Lewis,  The Screwtape Letters Is the U.S. government evil? You tell me. This is a government that treats its citizens like faceless statistics and economic units to be bought, sold, bartered, traded, tracked, tortured, and eventually eliminated once they’ve outgrown their usefulness. This is a government that treats human beings like lab rats to be caged, branded, experimented upon, and then discarded and left to suffer from the after-effects. This is a g
Post a Comment
Read more

April 27, 2018
A second Palestinian journalist has died after being shot by Israeli forces while covering the Gaza protests. Ahmad abu Hussein, 24, succumbed yesterday in an Israeli hospital, 12 days after he was shot in the stomach while wearing a Press flak jacket on April 13. By one report, Abu Hussein was shot by an expanding bullet, from hundreds of meters away. He was shot a week after journalist Yaser Murtaja was also shot in the torso by an Israeli sniper. Murtaja died early on the morning of April 7. Click here to read more.
Post a Comment
Read more

April 25, 2018
An Indian spiritual guru who claims to have millions of followers has been found guilty of raping a 16-year-old devotee in 2013. Asaram Bapu  faces a maximum sentence of life in prison in the latest in a series of high-profile rape cases in India, which have fuelled public protests and raised questions bout how police handle the cases and treat the victims. The verdict against the 77-year-old self-styled “godman” was read out inside a prison in the city of Jodhpur, in Rajasthan state, because of fears his followers may resort to violence. In August last year, another flamboyant and controversial Indian spiritual guru,  Gurmeet Ram Rahim Singh , was sentenced to 20 years in prison after being convicted of raping two followers . His supporters went on a deadly rampage in response,  killing at least 38 and injuring more than 200 during protests in Haryana state. Judge Madhusudhan Sharma will announce the prison term for Bapu later after hearing arguments from the prosecution and h
Post a Comment
Read more 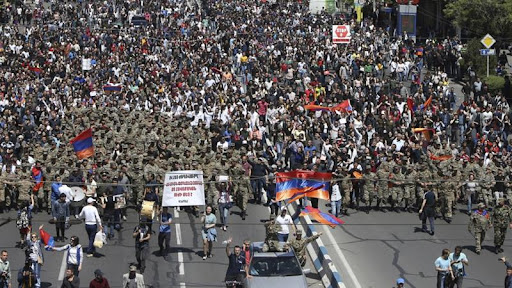 Protesters have demanded Serzh Sargsyan, Armenia's prime minister, to step down [Vahram Baghdasaryan/Reuters] Hundreds of soldiers have joined anti-government protests in the Armenian capital of Yerevan on Monday, accusing the country's prime minister of corruption and authoritarian rule. In a response to the ongoing protests, the Armenian defence ministry said it would take harsh measures against any member of the military taking part in the demonstrations. Al Jazeera's Robin Forestier-Walker, reporting from Yerevan, said Monday's events are a surprising development. "There are pictures and videos of the soldiers walking down main Yerevan streets. We understand that they are on active duty and that they are part of a peacekeeping force for missions abroad," Walker said. "We have also seen members of the clergy coming out into the streets to take part in the protests," he added.
Post a Comment
Read more

April 25, 2018
By Zahid Rafiq SRINAGAR, Jammu and Kashmir Seven people were killed in a day-long gun battle in Tral, south of Jammu and Kashmir, on Tuesday, the Indian army said. "The operation started very early. One of our soldiers and a policeman were killed. Till the last reports four militants were killed. The gun battle has ended but our soldiers are conducting an extensive search of the area,” Defence spokesman Col. Rajesh Kalia told Anadolu Agency. The gun battle occurred in Laam area, in the forests of Tral, where Indian intelligence agencies received a tip off about the presence of militants. Kashmir, a Muslim-majority Himalayan region, is held by India and Pakistan in parts and claimed by both in full. A small sliver of Kashmir is also held by China. The two countries have fought three wars -- in 1948, 1965 and 1971 -- since they were partitioned in 1947, two of which were fought over Kashmir. Also, in Siachen glacier in northern Kashmir, Indian and Pakistani troops have fought i
Post a Comment
Read more

April 25, 2018
A letter from Robert Cohen: “Israel was created exactly 70 years ago as a haven for refugees from the Holocaust. But the mistreatment of those suffering from today’s atrocities is simply not in line with my Jewish values. Because I care about Israel, I must stand up against violence, corruption, inequality, and abuse of power.” Natalie Portman, Friday 20 April 2018 Dear Natalie I too was a liberal Zionist. I too thought the problem was the leaders of Israel and their policies. I too thought a change of leadership and a change of policies could fix things. I don’t think that anymore. Like you, I care about “Jewish values” but I long ago gave up on the idea that Israel, and the Zionism that created and sustains the Jewish State, would protect those values. We should both be clear about what those Jewish values are.  They’re to be found in the Hebrew bible and are the ideas that have stood the test of time and been passed on to the world through Christianity and Islam:
Post a Comment
Read more
More posts