June 06, 2019
On a rare trip to Europe, Myanmar leader and Hungary PM discuss issue of ‘growing Muslim populations’. They are both racists and it's not difficult to see once more the wisdom behind - birds of the same feather flock together. She needs to be tried in the ICC for war crimes under her watch.

Myanmar’s State Counselor Aung San Suu Kyi speaks during a joint press conference in Hungary. She talked to Victor Orbán about Islam. Photograph: Zsolt Szigetvary/AP
From her failure to speak out against ethnic cleansing to imprisoning journalists, the reputation of Aung San Suu Kyi in the west has taken a battering in recent months.
But the leader of Myanmar has found a new ally in far-right, staunchly anti-immigrant Hungarian prime minister Viktor Orbán.
In a rare trip to Europe, state counsellor Aung San Suu Kyi, the Nobel peace prize laureate who was once the figurehead of the fight for democracy in Myanmar, met Orbán in Budapest. There, the two leaders found common ground on the subject of immigration and Islam .
“The two leaders highlighted that one of the greatest challenges at present for both countries and their respective regions – south-east Asia and Europe – is migration,” read a statement released after their meeting. 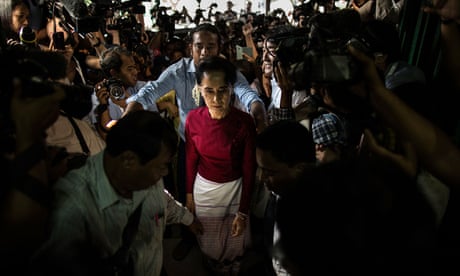 From peace icon to pariah: Aung San Suu Kyi's fall from grace
Read more
“They noted that both regions have seen the emergence of the issue of co-existence with continuously growing Muslim populations.”
Once lauded as the great democratic hope for Myanmar, Aung San Suu Kyi, who was elected as civilian leader in 2015 after living under house arrest by the military for 15 years, has proved a marked disappointment to most western governments who were her champions.
Her failure to condemn the military’s violent crackdown on the Muslim Rohingya minority in 2017 – which saw thousands of Rohingya raped and killed in what the UN described as an exercise in ethnic cleansing – and her defence of the military’s brutal actions against Myanmar’s Muslims have proved particularly contentious.
Aung San Suu Kyi’s government has since repeatedly failed to offer assurances to the million Rohingya now living in refugee camps in Bangladesh, where they fled over the border for safety, that if they return their security and pathway to citizenship would be guaranteed.
Orban, meanwhile, has an equally bad track record. His government declared a “a crisis situation due to mass immigration” in 2015, stirring up fear in Hungary over an alleged threat of migrants. The Council of Europe’s commissioner for human rights released a recent report accusing Orbán’s government of using anti-migrant rhetoric that fuels “xenophobic attitudes, fear and hatred”.
Aung San Suu Kyi has increasingly spoken out against the imposition of western ideas and principles in Myanmar, a view which was reflected by Orbán in the statement released after their meeting, where he emphasised his rejection of the “export of democracy” from other western countries.
A spokesperson for the Myanmar government could not be reached for comment.
Aung San Suu Kyi’s trip to central Europe was with the aim to strengthen economic ties in the region. Prior to Hungary, she visted the Czech Republic where she met with Prime Minister Andrej Babiš.

March 26, 2017
A friend of mine recently sent me a YouTube video link to a 3-part lecture by Professor Matthew R. Davies on "Understanding Islam". You can view the series by clicking here , here and here . I recommend this lecture series to any non-Muslim who is interested in the  subject. As a knowledgeable Christian, who teaches religion, Mr. Davies did an excellent job in discussing the faith of some 1.7 billion Muslims in the world. During the Q&A, Professor Davies was asked a question about grace in the Qur'an. The questioner was told by some Christians that the word 'grace' does not appear in the Qur'an. I am glad that Mr. Davies was able to correct the misconception on this subject. The Qur'an was revealed to Prophet Muhammad (S) in the early 7th century, C.E., in piecemeal over a period of 23 years in Arabia in  the language of the Arabs, i.e., Arabic. Obviously, it would be foolish to expect the English word 'grace' within the Qur'an. So, wh
Read more

August 06, 2015
I had no clue of who Tulsi Gabbard was before reading the news clip that she had introduced a resolution to protect religious minorities in Bangladesh on July 29.   Her first name sounded so familiar: Indian and Hindu! With a Google search, I soon found out that she is an elected Democratic Representative from the state of Hawaii.  She is an Iraq War veteran. She is also a Vice-Chair of the Democratic National Committee. Elected in 2012, she is the first American Samoan and the first Hindu member of the United States Congress. Her bio says that she is of mixed cultural and religious heritage. Her father, a Catholic priest, is of Samoan-European descent while her mother, a practicing Hindu, is of European-American descent. As a teenager, she chose Hinduism as her religion. She is also a strict vegetarian. Wikipedia says that the 34-year old Tulsi Gabbard is twice married. After her divorce from the first husband Eduardo Tamayo in 2006, she accepted the marriage proposal of A
Read more