Malaysia, Qatar pay tribute to former Egyptian president, but reaction from other governments has been largely muted.
18 Jun 2019 11:33 GMT

The United Nations has called for an "independent inquiry" into the death of former Egyptian President Mohamed Morsi, who died aged 67 after collapsing in a Cairo court on Monday, according to state media.
Morsi, who was buried on Tuesday, was a top figure in the Muslim Brotherhood and the first democratically elected president in Egypt's modern history.
He had been in jail since he was toppled by the military in 2013 after mass protests against his rule.
His death has been mourned by many people around the world, including in Turkey where mosques held special prayers on Tuesday, while leaders in Malaysia and Qatar offered tributes.
However, the reaction has been largely muted in many capitals.
Here are some of the statements on the sudden death of Morsi:

The United Nations human rights office has called for a "prompt, impartial, thorough and transparent investigation" into Morsi's death.
"Concerns have been raised regarding the conditions of Mr. Morsi's detention, including access to adequate medical care, as well as sufficient access to his lawyers and family, during his nearly six years in custody," Rupert Colville, spokesman for the UN High Commissioner for Human Rights, said on Monday.

The Tunisian Ennahda political party said it received the news with great sadness and shock and extended condolences to Morsi's family and the Egyptian people.
The movement expressed hope that "the painful incident would be a reason to put an end to the suffering of thousands of political prisoners in Egypt" and for starting dialogue for a new democratic political life in Egypt.

Jordan's Muslim Brotherhood held "the coup authorities in Egypt responsible for Morsi's death after his detention for seven years in solitary imprisonment".
The group also held the international community responsible for "the crimes of the coup" in Egypt. 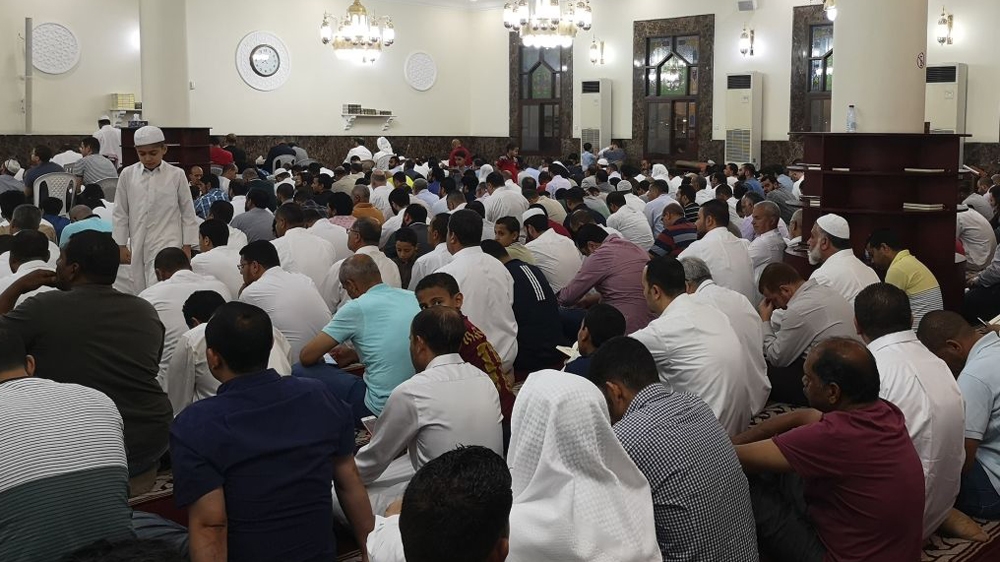 People attend the funeral prayer in absentia for former President of Egypt Mohamed Morsi at Muneera Al Suwaidi Mosque in Doha, Qatar [Serdar Bitmez/Anadolu Agency/Getty Images]
Qatari Emir Sheikh Tamim bin Hamad Al Thani offered his condolences to Morsi's family and Egyptian people.
"We received with great sorrow the news of the sudden death of former president Dr Mohamed Morsi. I offer my deepest condolences to his family and Egyptian people. We belong to God and to him we shall return," Sheikh Tamim said in a Twitter post. 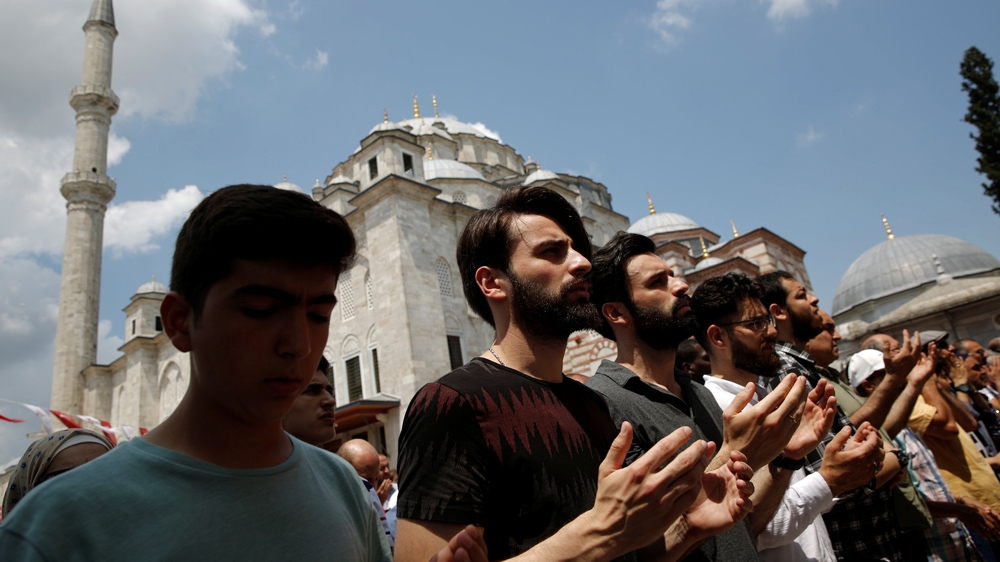 People attend a symbolic funeral prayer for Mohamed Morsi at the courtyard of Fatih Mosque in Istanbul, Turkey [Murad Sezer/Reuters]
Recep Tayyip Erdogan, the president of Turkey, on Monday blamed Egypt's "tyrants" for the death of Morsi.
"History will never forget those tyrants who led to his death by putting him in jail and threatening him with execution," Erdogan, a close ally of Morsi, said in a televised speech in Istanbul.
The Turkish leader called the former Egyptian president a "martyr," Turkey had been among Morsi's biggest supporters.
"May Allah rest our Morsi brother, our martyr's soul in peace," said Erdogan, who had forged close ties with the former president.
Thousands in Istanbul joined in prayer on Tuesday for Morsi on Tuesday. The prayer was called by Turkey's religious authority Diyanet and took place in the city's Fatih mosque.
Erdogan is expected to attend an absentee funeral for Morsi in Istanbul on Tuesday.

Sarah Leah Whitson, executive director of Human Rights Watch's Middle East and North Africa division, called Morsi's death "terrible but entirely predictable", given the government's failure to allow him adequate medical care.
"What we have been documenting for the past several years is the fact that he has been in the worst conditions. Every time he appeared before the judge, he requested private medical care and medical treatment," Whitson told Al Jazeera.
"He was been deprived of adequate food and medicine. The Egyptian government had known very clearly about his declining medical state. He had lost a great deal of weight and had also fainted in court a number of times.
"He was kept in the solitary confinement with no access to television, email or any communication with friends and family," Whitson said, arguing that there would not be a credible independent investigation on Morsi's death "because their [Egyptian government] job and role is to absolve themselves of wrongdoing ever".

In a Facebook post, Morsi's son, Ahmed, confirmed the death of his father.
"In front of Allah, my father and we shall unite," he wrote.

Mohammed Sudan, a leading member of the Muslim Brotherhood in London, described Morsi's death as "premeditated murder", saying that the former president was banned from receiving medicine or visits and there was little information about his health condition.

"He has been placed behind [a] glass cage [during trials]. No one can hear him or know what is happening to him. He hasn't received any visits for months or nearly a year. He complained before that he doesn't get his medicine. This is premeditated murder. This is slow death."
The Brotherhood's Freedom and Justice political party said in a statement that Egyptian authorities is responsible for Morsi's "deliberate slow death".
"[The Egyptian authorities] put him in solitary confinement... they withheld medication and gave him disgusting food... they did not give him the most basic human rights," the political party said in a statement published on its website.
The Brotherhood also called for crowds to gather outside Egyptian embassies around the world.

In a joint statement, Amr Darrag, a senior member of the Muslim Brotherhood and a minister of planning and international cooperation under Morsi, and Yehia Hamed, a former Egyptian investment minister under Morsi, said an international independent investigation into the death of Morsi should be made public.
"The Egyptian regime knew that the continued denial of access to medical treatment would lead to his premature death. To that effect, the death of President Morsi is tantamount to state sponsored murder," they said in the statement.
"The first democratically elected President has died through a concerted and active campaign by the Egyptian regime. This is a gross violation of international law. It must not be allowed to stand."

In a statement released after Morsi's death, Crispin Blunt, chairman of the UK's Independent Detention Review Panel, said his death in custody was representative of Egypt's inability to treat prisoners in accordance with both Egyptian and international law.
"The Egyptian government has a duty to explain his unfortunate death and there must be proper accountability for his treatment in custody. We found culpability for torture rests not only with direct perpetrators but those who are responsible for or acquiesce in it," he said in a statement.
"The only step now is a reputable independent international investigation."
Last year, a report by three UK MPs, under the panel, warned that the lack of medical treatment could result in Morsi's "premature death".

Amnesty International urged Egyptian authorities to investigate the death of Morsi.
"We call on Egyptian authorities to conduct an impartial, thorough and transparent investigation into the circumstances of Mursi's death, including his solitary confinement and isolation from the outside world," the London-based rights group said in a twitter post.
It also called for an investigation into the medical care Morsi was receiving, and for anyone found responsible for mistreatment to be held accountable. 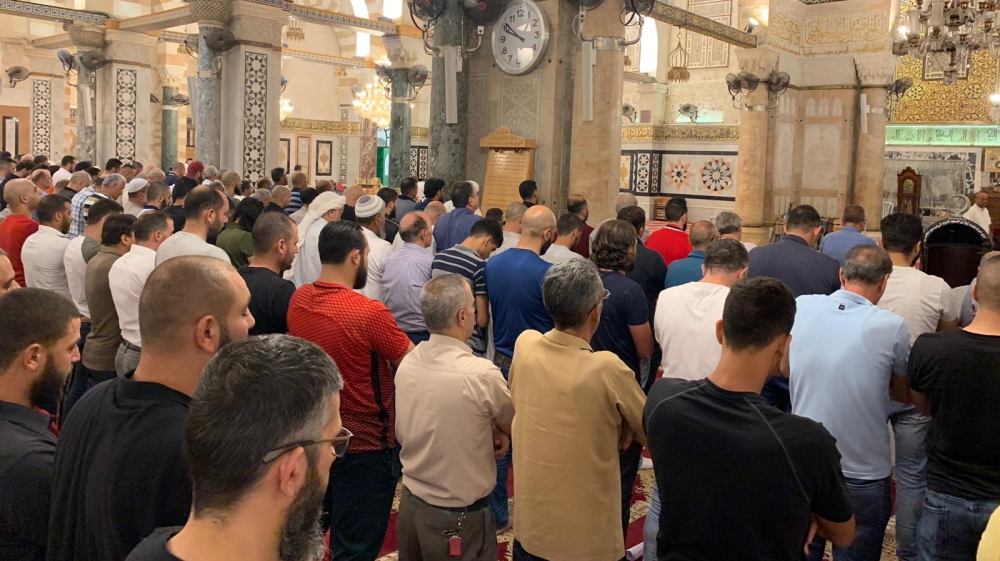 People perform funeral prayer on Monday night in absentia over the death of Mohamed Morsi following the night prayer at Al-Aqsa Mosque in Jerusalem [Anadolu Agency]
Hamas issued a statement paying tribute to Morsi, who had been a close ally of the Palestinian movement administering the besieged Gaza Strip.
It praised Morsi's "long struggle spent in  the service of Egypt and its people, and primarily the Palestinian cause".
At the Al-Aqsa Mosque in occupied East Jerusalem, funeral prayers were performed by Palestinians on Monday night. 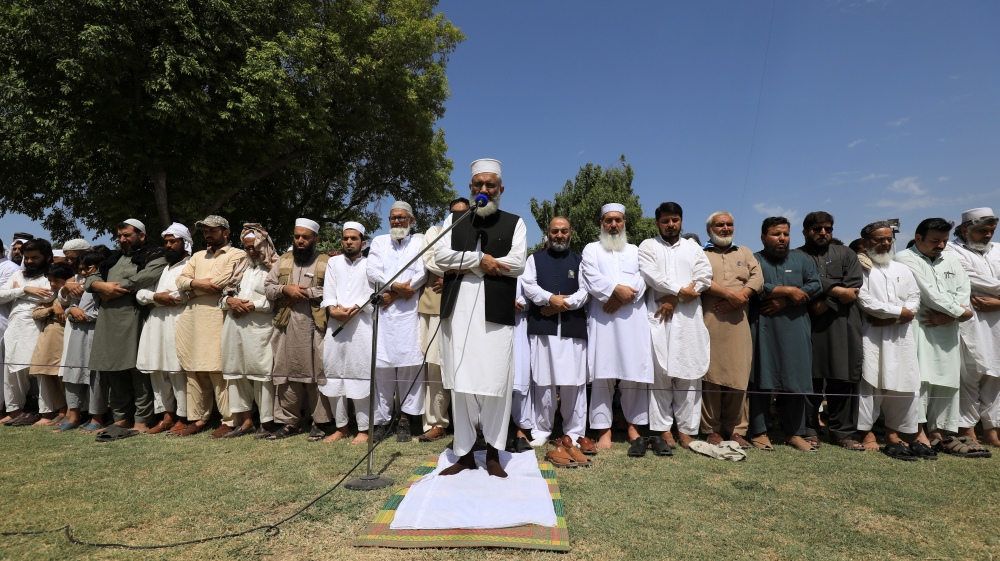 Siraj ul Haq, head of Pakistan's political and religious party Jamaat-e-Islami, leads the funeral prayers in absentia for the former Egyptian President Mohamed Morsi, in Peshawar, Pakistan [Fayaz Aziz/Reuters]
Pakistan's religious-political group, Jamaat-e-Islami, said the "Muslim world has lost a true hero".
"Morsi stood tall in the face of all pressures aimed at forcing him to withdraw his struggle for fundamental rights of the people of Egypt and his support to Palestine," the group's chief Senator Siraj-ul- Haq said in a statement on Twitter.
He announced that the party on Tuesday would hold funeral prayers in absentia for Morsi across Pakistan.

Malaysia's foreign ministry said it was "shocked and saddened by the sudden death" of Morsi.
"During his tenure as president, Mr Morsi showed courage and moral fortitude in his attempt to lead Egypt away from decades of authoritarian rule and establish true democracy there," Foreign Minister Saifuddin Abdullah said in a statement.
"I would like to extend my deepest condolences to the bereaved family of Mr Morsi and the people of Egypt."

SOURCE: Al Jazeera and news agencies
Posted by Habib Siddiqui at 6:29 AM