Sri Lanka increasingly become a den of intolerance for the minorities

June 06, 2019
Sri Lanka, the Buddhist majority country, has once become a den of intolerance against minorities, esp. Muslims. The Buddhist terrorist outfit Bodu Bala Sen has vowed to exterminate or remove them from the island nation. The government has been guilty of promoting hatred and intolerance that is popular with hatemongering Buddhists. As a protest, Muslim ministers have resigned (see the report below).
=========
Muslim ministers resign after hardline Buddhist monks demand their removal following deadly Easter bombings.
===

Colombo, Sri Lanka - All of Sri Lanka's Muslim ministers and their deputies have resigned from their portfolios after accusing the government of failing to guarantee the security of the nation's minority Muslim community amid fears of attacks following the Easter suicide bombings.
The decision comes after hardline Buddhist monks, including firebrand monk Galagoda Aththe Gnanasara Thero, set a deadline to the government to fire Muslim provincial governors and a minister.
Gnanasara, who has long been accused of instigating hate crimes against Muslims, was released from jail on a presidential pardon last month.
The resignations of nine ministers and two provincial governors come after thousands of people led by Buddhist monks began demonstrating this morning in the country's central city of Kandy, 115km east of the capital Colombo.
Three weeks ago, mobs swept through Sri Lanka's North Western Province, destroying hundreds of Muslims' properties and killing one in apparent reprisal for the April suicide bombings in the island nation - a popular tourist destination.
"It is disturbing to see Muslim politicians being forced to resign their posts on the basis of unproven allegations made by politically powerful religious leaders who claim to speak for the Buddhist majority, backed by a thinly veiled threat of violence," said Alan Keenan, Sri Lanka Project Director, International Crisis Group, referring to two governors.
"This sets a disturbing precedent, especially in Sri Lanka, where the repeated violation of the due process rights of minorities and political dissidents has contributed directly to Sri Lanka's decades of extreme political violence," he told Al Jazeera.
Keenan, however, said that police should investigate the allegations that some Muslim politicians may have been linked to Easter blasts.
Police have been accused of failing to intervene in the attacks in Kottaramulla and Minuwangoda in spite of a government curfew.
More than 250 people were killed in the coordinated attacks on churches and hotels blamed on a local Muslim group, National Thowheed Jamath (NTJ).At a press conference on Monday, Rauff Hakeem, the leader of Sri Lanka's primary Muslim political party, the Sri Lanka Muslim Congress, said: "All Muslim cabinet, non-cabinet and deputy ministers - all those representing Muslims - will resign [from their portfolios].
"If our ministerial portfolios is in the way, we are willing to give it up for the safety of our community."
He added that the Muslim community was paying a heavy price due to the crimes of a few individuals even after complying with security forces and the government on various rules and regulations such as the closure of madrasas.
He said that the Muslim politicians would continue in their positions as Members of Parliament. The former ministers will sit at the back of parliament and will cease to hold any ministerial positions.
"We will continue to support this government but will give them a grace period of one month to complete their investigations," he said. "Until such time we don't feel that it's suitable to remain in this government." 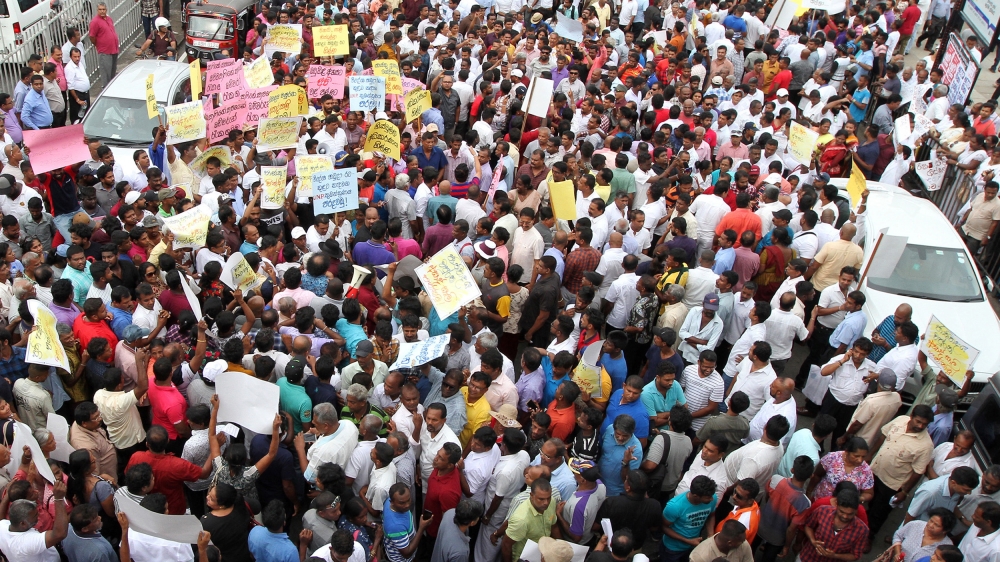 Meanwhile, in Kandy, protesters gathered in support of hardline Buddhist Monk Athuraliye Rathana Thero, who began a "fast-unto-death" on Saturday, demanding the sacking of two Muslim governors and a Muslim cabinet minister in the Buddhist-majority island nation of 21 million people, nearly 10 percent of whom are Muslims.
Thero has said the two governors are linked to the Easter bombings.
The monk ended his three-day fast earlier on Monday after Western Province Governor Azath Salley and Eastern Province Governor MLAM Hizbullah submitted their resignations to President Maithripala Sirisena, whose office said they have been accepted.
He was subsequently whisked away in an ambulance to the Kandy National Hospital for treatment.
Tension prevailed in Kandy as the crowd rallied outside the famous Temple of the Tooth Relic, where Buddhists believe a tooth of the Buddha is enshrined. Shops were forced to close and public transport came to a halt in the city that witnessed anti-Muslim riots last year.
Gnanasara, head of the hardline Bodu Bala Sena (BBS) or "Buddhist Power Force", gave a speech at the protest saying, "for the sake of the children of this country, we will defeat these extremists even if it means dying."
The head of the Catholic Church in Colombo, Cardinal Malcolm Ranjith, also travelled to Kandy on Monday to express solidarity with Thero.
"We support the monk's campaign because so far justice has not been served," Ranjith told AFP in Kandy.

Mangala Samaraweera, Sri Lanka's minister of finance, tweeted that the cardinal was "fanning the flames of hatred" by participating in the protest.
In his resignation letter addressed to Sirisena, Hizbullah said there had been a "calculated attempt to discredit the Muslim community and create fear psychosis" over the Easter bombings.
"As part of an attempt to target my community, racist forces have called for my resignation without any reason," he wrote.
The Muslim politician said as he was "convinced that the Muslim community's safety cannot be guaranteed" he had decided to resign "only in the interest of my community".
Sri Lanka imposed a state of emergency in the wake of the Easter attacks, empowering security forces to arrest and detain suspects. Nearly 100 people linked to the local NTJ group have been arrested since then, according to the government. 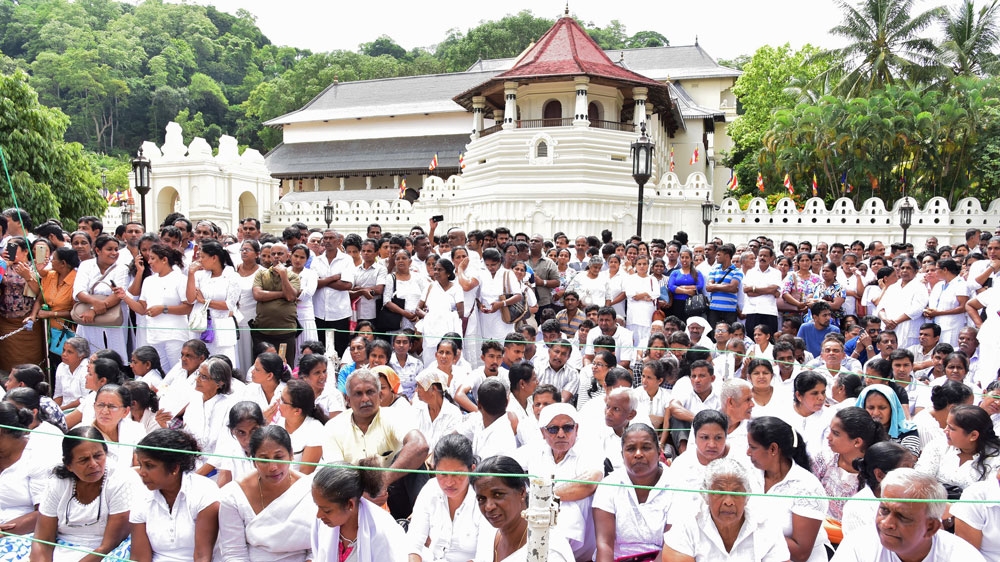