The Kurdish people of Iraq have voted in a referendum for its independence. From news reports it is obvious that the results would indicate a vast majority opting for independence. If granted independence, against the wishes of its neighbors, it is going to significantly change the politics of the region.
Against this backdrop, Antonio Guterres, UN secretary-general, expressed concern on Monday about the potentially destabilising effects of the referendum, calling on Iraq and the Kurdistan Regional Government (KRG) to resolve differences through dialogue and compromise.
He also told Iraqi Kurd authorities to ensure that the work of the UN mission in Iraq "will be allowed to continue unhindered".
However, KRG President Masoud Barzani defended the non-binding vote, saying only through the referendum can Kurds secure their future.
He also pledged to start negotiations with Baghdad officials as soon as the result of the votes is known. 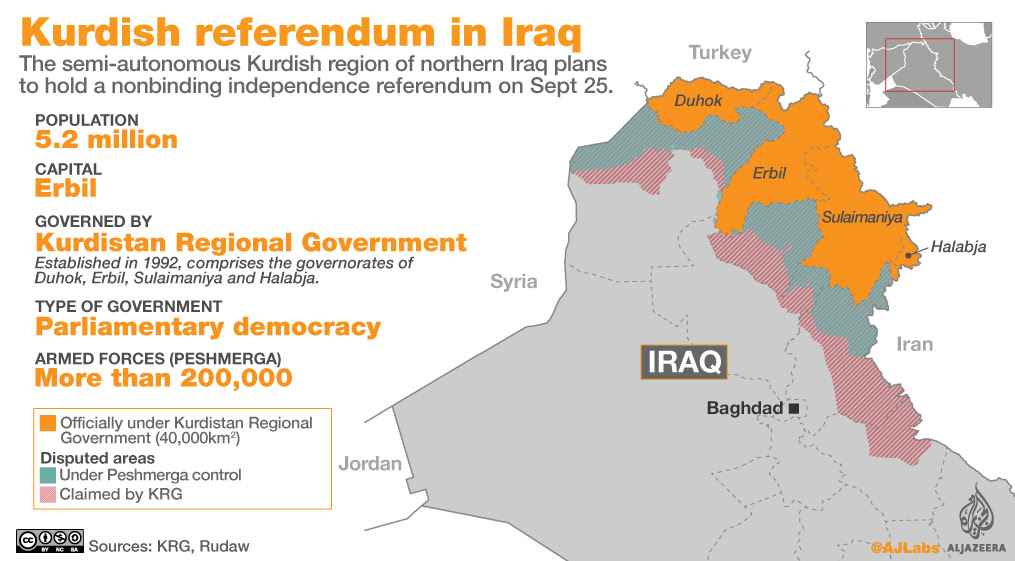 The Kurds are likely to approve the referendum, but they are not expected to result in any immediate declaration to separate Iraq.
Bayan Sami Abdul Rahman, KRG representative to the US, says that while the result is non-binding for the Iraqi government, it is "binding" for the Kurdish leadership "to follow the will of the people".
"The Kurdish leadership now has the mandate to negotiate with Baghdad on an amicable separation, on a new relationship between Erbil and Baghdad," she told Al Jazeera from Washington, DC.
The referendum has raised alarm in Iraq's neighbours - Turkey, Iran and Syria - over concerns it could encourage their own Kurdish minorities to break away.
Turkey is home to the largest Kurdish population at an estimated 14 million.
Turkish President Recep Tayyip Erdogan said on Monday that his country would do whatever it takes to block efforts against the Turkey's territorial integrity.
The US and the UN have also condemned the referendum.
Iraq and other neighbours of the Kurds "have to understand that we have done this step by step", Bayan Sami Abdul Rahman told Al Jazeera.
"We are taking this very seriously, we want to engage in dialogue. We don't want to destabilise Iraq or Kurdistan ... but certainly our aim is an independent Iraqi Kurdistan in the near future."
Israel has been in support of Kurdish independence.
Here is an interesting article on how Israelis feel about Kurdish independence.
Posted by Habib Siddiqui at 6:59 PM