Myanmar: UN threatens to withdraw aid over 'policy of apartheid' against Rohingya

The UN has had a presence in internally displaced persons camps in Myanmar’s Rakhine state since 2012. Photograph: Christophe Archambault/AFP/Getty Images
The United Nations in Myanmar has warned it will withdraw support in Rakhine state to avoid complicity in a government “policy of apartheid” for Rohingya Muslims.

A letter seen by the Guardian, sent from UN resident coordinator, Knut Ostby, to the Myanmar government, relayed a decision by the UN and its humanitarian partners to withhold support “beyond life-saving assistance” in internally displaced persons (IDP) camps deemed “closed” by the government, unless fundamental changes occur.
UN agencies have worked continuously in camps for Muslim communities displaced by violence in Myanmar’s restive Rakhine state seven years ago
The letter, dated 6 June, said that from now on, UN assistance could only be provided when it was “linked to tangible progress made on the fundamental issue of freedom of movement”. Currently, Ostby said, the policy by the Myanmar government “risks entrenching segregation”. 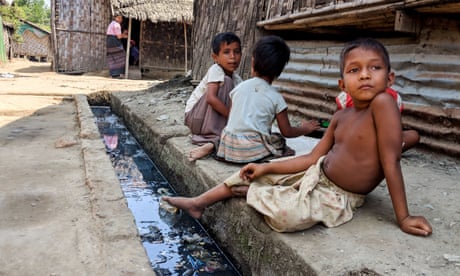 'We will lose any hope of going home': Rohingya live in fear of resettlement
Read more
In 2017, the Myanmar government vowed to begin closing the IDP camps, where 128,000 Rohingya and Kaman Muslims have been forced to live in squalid, insanitary conditions with their freedom of movement severely restricted after their homes were destroyed in violence in 2012.
The government agreed to follow recommendations of a commission led by former UN Secretary General Kofi Annan which called for the displaced people to be rehoused in a voluntary and consultative manner, where possible, near their original villages, and with access to livelihoods.
However, internal UN reports seen by the Guardian, and accounts from humanitarian agencies on the ground, have demonstrated the reality of the “closures” is that the living conditions for the relocated Rohingya remain dire and virtually unchanged, with their basic human rights, particularly freedom of movement and access to livelihoods, almost entirely denied.
The letter, sent to Dr Win Myat Aye, Myanmar’s minister of social welfare, relief and resettlement, pointed out that those in the old “closed” camps or newly built camps were still suffering the same indignities, with no access to “basic services” or “livelihood opportunities”. Even the location of the camps has remained virtually unchanged.
Explaining the decision, a senior UN official in Myanmar, who spoke on condition of anonymity, said: “The government plan to build permanent housing on or next to the camps makes it very clear that the apartheid-like separation will be permanent and therefore crosses a red line for continual support to the camps.”
The Rohingya have long been one of the most persecuted ethnic groups in Myanmar. The 2012 violence, which saw hundreds of thousands of Rohingya homes destroyed, was followed in October 2016 and August 2017 by security operations that drove around 800,000 people over the border to Bangladesh. About half a million are estimated to remain in Myanmar.
This is the first known attempt by the UN to adopt a tougher policy on camp closures, following months of warnings contained in a series of damning internal assessments on the government’s actions and the risk of complicity in abuses if international agencies continued to provide assistance.
A UN document written in September 2018, noted that “the only scenario that is unfolding before our eyes is the implementation of a policy of apartheid with the permanent segregation of all Muslims, the vast majority of whom are stateless Rohingya, in central Rakhine.”
“The government’s current strategy would essentially formalise and entrench a system of segregation that would perpetuate human rights violations for years to come,” it added. 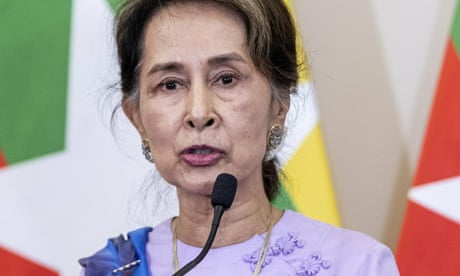 Aung San Suu Kyi finds common ground with Orbán over Islam
Read more
Laura Haigh, Amnesty International’s Myanmar Researcher, said: “Rakhine has been an apartheid state for years”.
“The international community remains paralysed,” she said. “The status quo cannot continue, and unless we see concrete progress towards restoring Rohingya rights, those providing support or assistance in Rakhine – aid agencies, donor states, or others – risks being complicit in the state’s enforced segregation and crimes against humanity.”
The Guardian understands that the UN has for months sought to bring government policy on camp closures in line with international standards. It’s believed the Myanmar government on some occasions refused to meet with Ostby to discuss camp closures and that his robust stance on some human rights issues behind closed doors contributed to the government’s resistance to a renewal of his contract as the UN resident coordinator.
As a result, Ostby is stepping down in the coming months. The Guardian understands that the new Myanmar UN resident co-ordinator will be Ola Almgren, current resident co-ordinator of the Philippines.
Soe Aung, deputy minister of social welfare, relief and resettlement, said that the government had not seen Ostby’s letter as a warning for the withdrawal of UN support and that the correspondence had instead demonstrated “the willingness and readiness of UN Agencies and its humanitarian partners to support the government of Myanmar in implementations towards reintegration in camp closed sites.”
“UN Agencies in Myanmar and our ministry communicate very closely and we discuss openly and frequently about the collaboration in humanitarian assistance, peace, stability and development,” said Soe Aung.
When contacted by the Guardian for comment, a UN spokesperson confirmed that it had “sent a letter on behalf of the Humanitarian Country Team to the government on 7 June 2019,” but declined to comment on its contents.
“We wish to reiterate our commitment to implementing durable solutions for the IDPs in central Rakhine in cooperation with the government and in accordance with international principles,” they added.Myanmar: UN threatens to withdraw aid over 'policy of apartheid' against Rohingya | World news | The Guardian
Posted by Habib Siddiqui at 6:35 PM