They Pump $15 Billion A Year Into Bangladesh's Economy — But At What Cost? 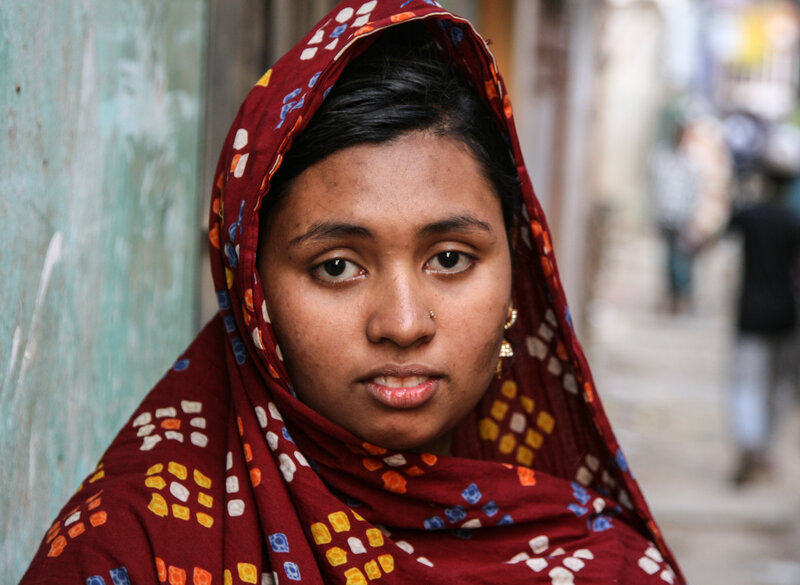 Mim Akter Tania, 22, thought she was getting a job as a hospital custodian in Saudi Arabia. Instead, she says, she ended up as a domestic servant with an abusive boss. Jason Beaubien/NPR hide

Jason Beaubien/NPR
How do you get ahead in Bangladesh?
Often it's by leaving Bangladesh.
An estimated 10 million Bangladeshis are currently working abroad, primarily as low-skilled laborers in the Arabian Gulf. Only India, Mexico, Russia and China send out more migrant workers each year according to the World Bank.
The Bangladeshi migrant workers are gardeners, construction workers, janitors and maids. On average they earn $400 a month, far more than they'd make doing the same jobs at home. And the totals add up. The $15 billion sent home by migrant workers last year — called "remittances" in economic jargon — is Bangladesh's second-largest source of foreign earnings after its gigantic textile industry.
But their months or years abroad can turn into misery, with stories of scams, exploitation and abuse, according to labor activists and human rights groups.
Getting in line
An entire industry has developed in Bangladesh to recruit, screen and process workers who yearn to go abroad.
Outside a two-story office building on the eastern side of the capital, Dhaka, young men hoping to get jobs in the Arabian Gulf are waiting on the street. Before they can finalize a labor contract they have to get poked, prodded and fingerprinted at a branch office of the Gulf Approved Medical Centres Association. 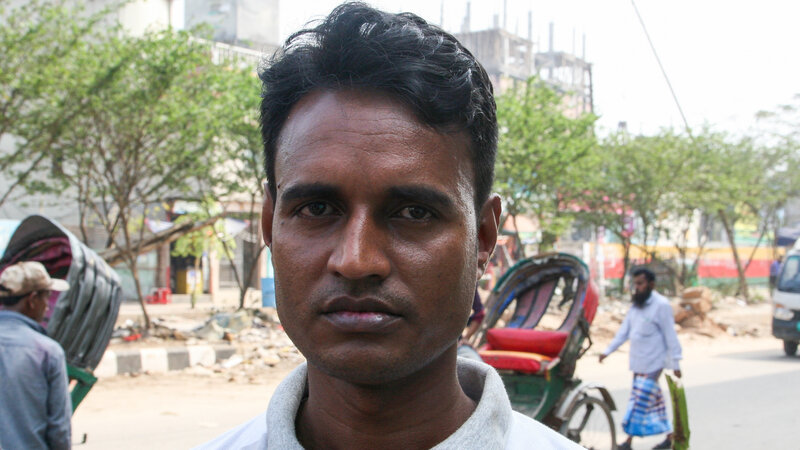 Mohammad Kiron Mia, 36, has worked abroad twice in Oman, as a tailor and then a gardener. He says he can earn twice as much there as in Bangladesh and that these jobs are a chance "to make a better life for my family and my children." Jason Beaubien/NPR hide caption
toggle caption
Jason Beaubien/NPR 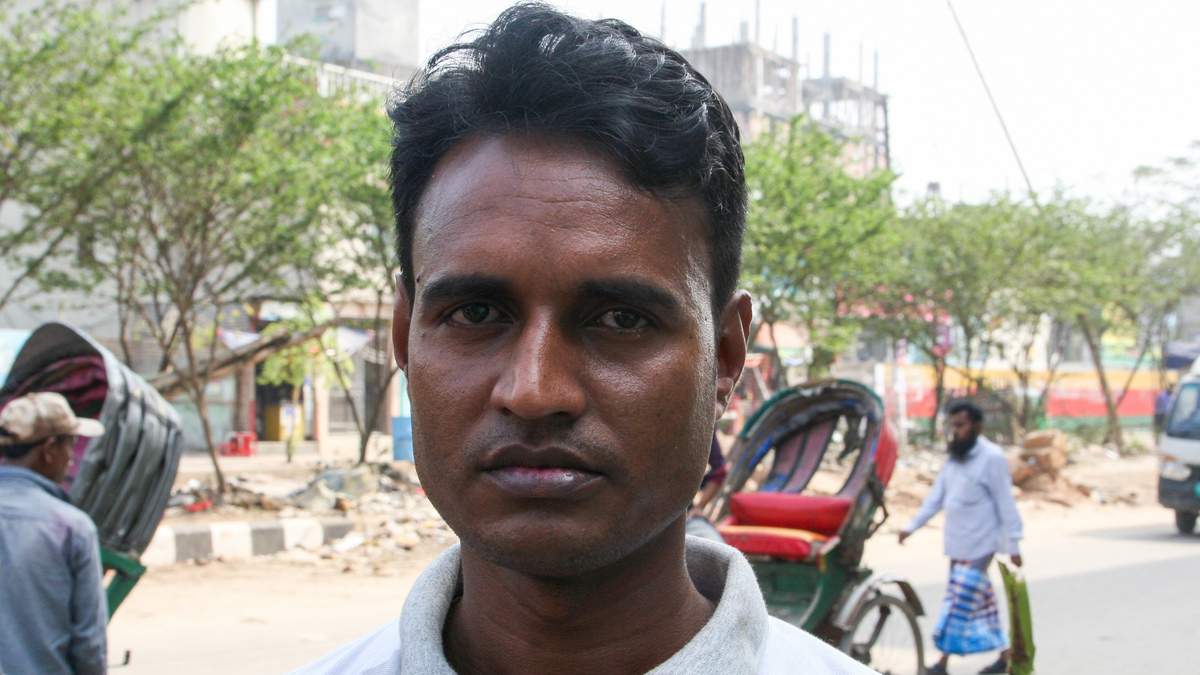 Mohammad Kiron Mia, 36, has worked abroad twice in Oman, as a tailor and then a gardener. He says he can earn twice as much there as in Bangladesh and that these jobs are a chance "to make a better life for my family and my children."
Jason Beaubien/NPR
The job seekers are given physical exams at the Saudi-run agency to make sure they are fit to work. They are screened for HIV, TB and other infectious diseases. If they test positive, they're barred from working in the Gulf (an official in the GAMCA office says they can still find work somewhere else in the world). Women have to take a pregnancy exam and are excluded if they're pregnant.

Article continues after sponsor message
The agency uploads their fingerprints and travel documents into a centralized database that will be available to immigration authorities in the countries the workers are sent to.
One of the applicants on a recent April day is Mohammad Kiron Mia, who is trying to get a job as a gardener in Oman.
For Mia, 36, this will be his third trip overseas. During the first he worked as a tailor in Oman for seven months. Then he returned on a two-year contract as a gardener.
"We are poor people," he says of himself and several neighbors from his village who are with him outside the agency. He is hoping to return to Oman: "The jobs in Oman are better opportunities for us because the work permit costs far less than a permit for Saudi Arabia or Dubai."
Permit fees are based on the destination and job and can cost thousands of dollars.
"I want to make a better life for my family and my children," he says. "I can make twice as much money working in Oman compared to working here in Bangladesh."
The GAMCA office where Mia has come to submit his paperwork is one of 46 across Bangladesh that process workers exclusively for Gulf countries. Other labor brokers with other agencies set up jobs for Bangladeshis seeking to work in India, Malaysia, Singapore and other parts of Asia.
"Bangladesh is one of the top 10 countries in the world for migration and remittance according to World Bank," says Shariful Islam Hasan, head of migration for BRAC, Bangladesh's largest nonprofit development and social service agency. Hasan says remittances are hugely important to Bangladesh. A single migrant's wages help provide education, health care and food for that worker's family. Bangladeshis will work abroad sometimes for five, 10, even 20 years, he says, to try to attain a better life.
"You will not find a single person in Bangladesh who doesn't have someone — a relative, someone — abroad," he says. "So everyone is very much involved with this migration and remittances process."
One of the great benefits of remittances, Hasan says, is that unlike the money brought into the country by exports from the garment industry, this money is dispersed all across Bangladesh.
Yet Bangladesh is still one of the poorest countries in the world. Despite recent progress, per capita income remains below $2,000 a year. 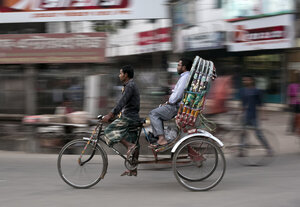 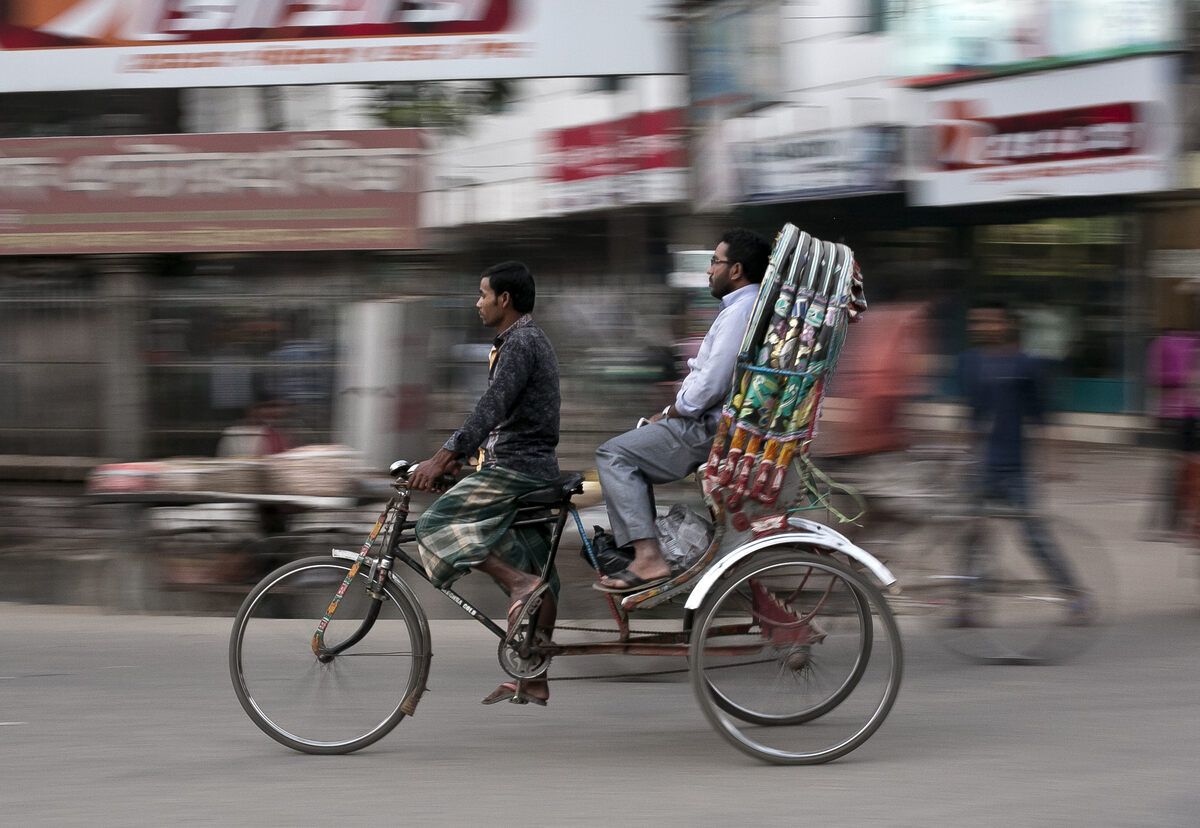 Low wages and a lack of formal jobs at home push millions of Bangladeshis to seek work abroad. Rickshaw drivers hustle to earn a $5 or $6 a day. The minimum wage in Bangladesh's largest industry, textiles, is just $95 per month.
Allison Joyce/Getty Images
Broken promises
Hasan says there are many hazards for foreign workers. Some are scammed by job brokers who overcharge them for visas, flights and work permits. Others sign up to do one type of work — for instance driving a delivery van in Abu Dhabi — and end up toiling long hours instead outside in scorching heat on a construction site in Dubai. Women primarily find jobs as maids and housecleaners. Hasan says women are often overworked and subjected to physical, emotional and even sexual abuse.
"If you don't get a holiday, if you don't have food or what you need — according to the definition of modern-day slavery, this is one kind of slavery," he says.
Mim Akter Tania, 22, knows this all too well. Tania shares an apartment with her husband, daughter and another young married couple in a crowded part of the Bangladesh capital known as Old Dhaka. When Tania got a contract last year to work as a custodian at a hospital in Saudi Arabia, she was incredibly excited.
"At that time we didn't have much money so I thought that going to Saudi Arabia might give us a better chance to live a good life," she says.
She hoped she could move up from mopping floors at the hospital to working as a nurse's assistant or a medical technician. She sent her daughter, just a year old at the time, to live with her mother and signed a two-year contract to work in Saudi Arabia.
But when Tania got to Riyadh there was no job in a hospital.
Instead she was sent to work as domestic servant.
She says that after she worked all day at her boss's house, he would send her in the evening to clean his brother's house.
"I knew I had to do the work but my employer was not a good human being," Tania says. "He often beat me and behaved very rudely toward me."
When the boss and his brother tried to rape her, she says, she ran away and went to the Saudi police.
But the police just brought her back to her employer's house.
Two months after she arrived, she says, her boss pushed her off a balcony. The fall broke her leg. From the hospital Tania got in touch with the Bangladeshi Embassy, which moved her to a safe house full of other Bangladeshi women who had also fled their employers and were waiting to go home.
Her salary was supposed to be $160 a month plus room and board, but she says, "I never got any payment for the work I did there. None."
Hasan from BRAC's migration program and other worker advocates say that Tania's experience is far too common. Bangladesh has come to rely so heavily on the money that workers send home every month, Hasan says, that mistreatment and abuse are often overlooked. 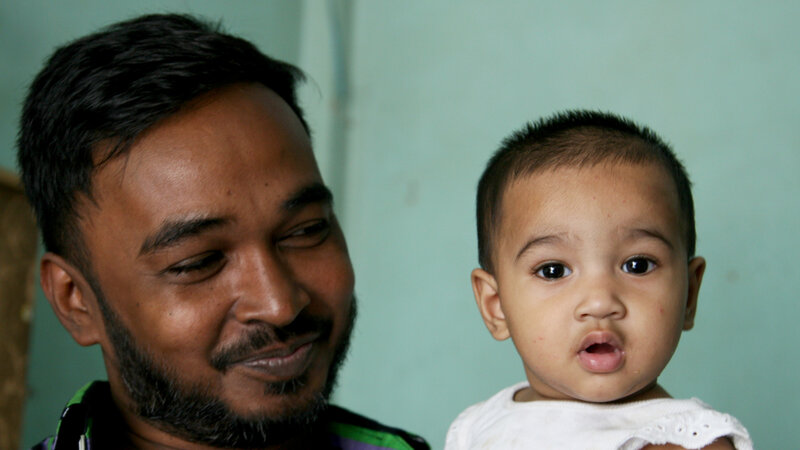 Masud Ali Yakub says going to work abroad was a "big mistake." In 2014 he paid $7,500 for a three-year work permit in Qatar. He borrowed much of the money. Yakub hoped to get a job as a driver but only found low-paying work installing drywall. Yakub, at home now with his daughter in Dhaka, says he is still paying off his loans. Jason Beaubien/NPR hide caption
toggle caption
Jason Beaubien/NPR
Underage workers
At times even children get pulled into the foreign worker system.
At the Kurmitola General Hospital near the international airport in Dhaka, the Begum family is gathered on a row of blue plastic benches in the ground floor waiting room. Their daughter, who they say is 16, is huddled next to her mother. She is wearing a black burqa with no head covering over a filthy hooded sweatshirt. She has bruises on her left cheek and a cut at the base of her neck. A small duffel bag with a checked-luggage tag still wrapped around the handle sits at the girl's feet. She refuses to speak. Her mother, Minara, says she and her husband hadn't heard from their daughter in months when she suddenly called from Saudi Arabia saying she was coming home.
Minara says this whole saga started months ago with a woman named Beauty, who came to the Begum family's village and offered to get Minara's daughter a job cleaning houses in Dhaka. While the family no longer heard from their daughter regularly, every month Beauty sent them 16,000 taka, almost $200.
Minara says her daughter was 15 when she left their village with Beauty. Now, just a matter of months later the girl is holding a passport that lists her age as 26.
Her parents believe that Beauty must have arranged for the fake passport. Minara and her husband brought the teenager straight to this hospital from the airport, but she won't let the doctors or nurses touch her. She refused to go into a small examination room and is scared to enter the stalls in the hospital's public restrooms.
All her daughter will tell them, Minara says, is that she wants to go home.
Minara is still trying to understand what happened to her daughter, what horrors she experienced. One of the things that made Minara think her daughter was OK was that every month her wages arrived like clockwork. Minara had no idea that that money was coming from Saudi Arabia — and that it was part of the hundreds of millions of dollars in foreign remittances flowing every month into Bangladesh.
Posted by Habib Siddiqui at 4:42 PM